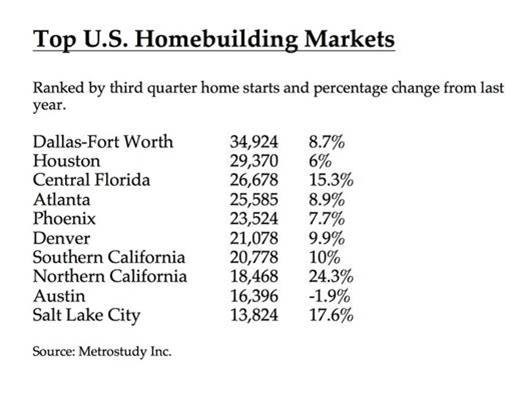 No place builds more new houses than Dallas-Fort Worth.  As of the third quarter of this year, D-FW was the solid leader in U.S. homebuilding with almost 35,000 single-family annual home starts, according to a new report by housing market analysts at Metrostudy Inc.  Houston was second nationally with 29,370 home starts in the 12-month period ending in September. D-FW and Houston have topped the country in home construction for several years.  And the two Texas titan building markets show no sign of a slowdown. D-FW starts were up 8.7 percent and Houston starts were 6 percent higher than a year ago, Transwestern found.

While D-FW builders are still busy, what they are building has changed, according to Metrostudy's Paige Shipp. "Over the past 12 months, builders and developers have been addressing the need for affordable new homes by developing in previously overlooked submarkets and building smaller, less amenitized homes," said Shipp, regional director of Metrostudy's D-FW market. "As such, the median price has dropped since last year.The decrease in price is not devaluation, rather it's an indication that buyers are purchasing smaller, more affordable homes."

Shipp said that homebuyer traffic has slowed in North Texas in recent months. "While this cooling may worry some, it should be viewed as a positive stabilization of an overheated, frenzied market," she said. "Builders and developers should use this opportunity to catch their breaths and return to the fundamentals of homebuilding including land acquisition and selling." Shipp said the inventory of vacant new homes in the D-FW has increased to the highest level since 2012.