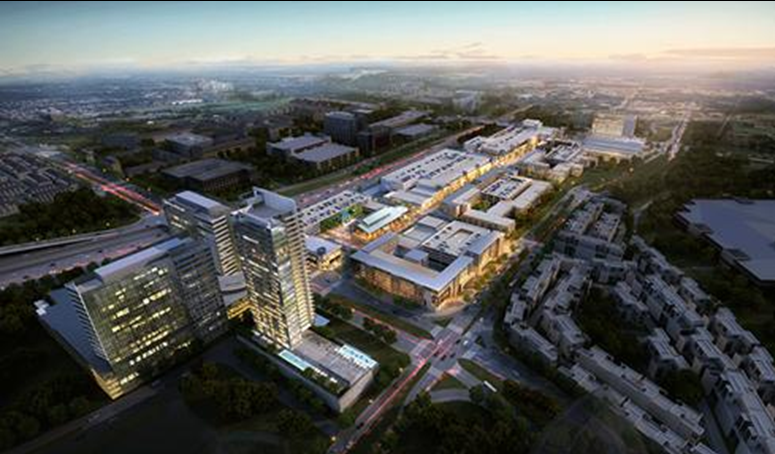 In the global competition for corporate headquarters, a 255-acre (103 ha) project anchored by an open-air urban village in Plano, Texas, is landing some big names. Toyota, FedEx, JPMorgan Chase, and Liberty Mutual are among the companies building offices in the project, which includes a 15-story hotel, a 55,000-square-foot (5,100 sq m) food hall, and more than 1,000 residential units.  One of the largest eat/work/play/live developments in Texas, the $3 billion project is attracting companies by focusing on the interests of their generation X and millennial employees, says Fehmi Karahan, chief executive of the Karahan Companies, the master developer.  “Human resource departments are involved in the decision-making process,” Karahan says. “They were emphasizing being in the right location for their employees.”   The master plan for the 38-acre (15 ha), 415,000-square-foot (38,600 sq m) open-air retail district, developed by Gensler, includes a mix of residential, boutique offices, a microbrewery, and a beer garden for live outdoor shows. More than 85 percent of the retail and restaurant space has already been leased, Karahan says. Tenants include Dean & Deluca, the upscale grocer; Tommy Bahama; Del Frisco’s Double Eagle Steakhouse; and True Food Kitchen.  The first phase of the residential component—a four-story apartment complex with more than 600 units—is nearing completion, with rates starting at $1,065 a month for a one-bedroom unit. The residential portion of the project includes a 30-story apartment tower and a 24-story luxury condominium tower with 88 units. About 25 percent of the condos have been sold, the developer says. Prices for condos start at $650,000, according to the developer.  Although it has been only two years since the land deal was completed, the project is almost halfway complete. The first retail shops are expected to open later this year in the village, and Toyota is scheduled to open its campus in 2017.