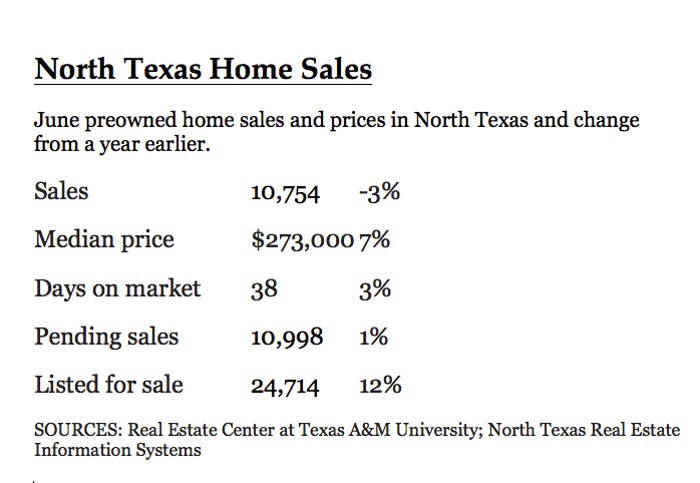 North Texas home sales dropped in September by the largest percentage in more than seven years. Preowned home sales in the area fell by 7 percent from September 2017. That was the biggest year-over-year sales decline since early 2011, according to data from the Real Estate Center at Texas A&M University and North Texas Real Estate Information Systems.  Home sales by real estate agents have been down in three of the last four months. Higher mortgage costs and years of rising home prices have caused some buyers to pull back from the market.  Mortgage rates on average are currently about 4.7 percent — the highest level in seven years — and are expected to go higher in 2019.  With September's sales decline, preowned home sales by real estate agents in North Texas are now flat with the same period of 2017. A record of more than 106,000 homes sold in the area last year.  "We think things are going to be flat," said Dr James Gaines, chief economist for the Real Estate Center. The Dallas-Fort Worth housing market has cooled significantly since early in the year when sales were still up by double-digit percentage rates from 2017 levels.

Home price growth has also slowed.  Median home sales prices rose by 4 percent in September from a year earlier to $251,000.  For the first nine months of 2018, prices are up 5 percent from the sale period in 2017. With sales declining, the number of houses on the market in North Texas has growth to 25,895 preowned single-family homes listed with real estate agents at the end of last month. That's 16 percent more homes for sale in the area than a year ago.  On average it took 44 days to sell the houses that trade in September — up 5 percent from a year earlier. Currently there is about a 3-month supply of homes available for purchase in the more than two dozen North Texas counties included in the survey.