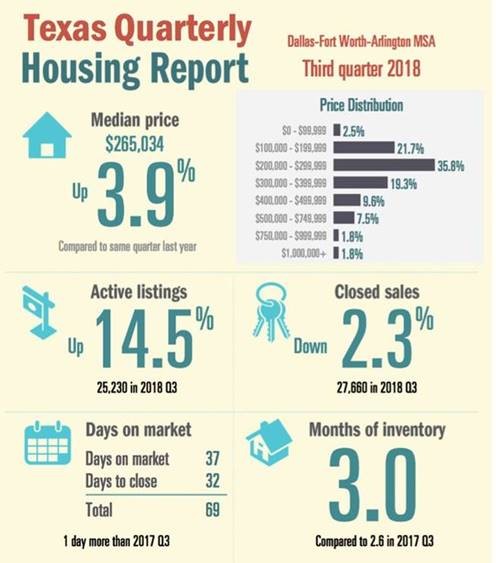 Dallas-Fort Worth was the only major Texas market that saw a decline in third quarter home sales. D-FW preowned homes sales fell 2.3 percent from third quarter 2017, according to a new report by the Texas Association of Realtors. Statewide sales were 4.4 percent higher than in the previous year. Among the big metro areas, the largest sales increase was in Houston were real estate agents sold 11.6 percent more houses than they did in third quarter 2017.

"Our market remains extremely strong but is still slowly moving toward normalization," Dr. James Gaines, chief economist with the Real Estate Center at Texas A&M University, said in the report. "Median home prices and home sales are up, but the rate of increase statewide is beginning to slow compared to prior years."

Even with the year-over-year sales decline, D-FW had the largest number of preowned property sales in the state with 27,660 properties changing hands, according to the Realtors association. The Houston-area was second with 24,028 home sales. Median home sales prices rose 4.4 percent in the third quarter from the previous year to $235,000. In D-FW, prices were up 3.9 percent to a median of $265,034.

Residential appreciation in North Texas has slowed this year after median home values grew by more than 40 percent during the last five years. D-FW had the largest inventory increase of any of the major metros - up 14.5 percent from third quarter 2017. "At the current rate that home sales and active listings are increasing, we are trending towards another record-breaking year in Texas real estate," Kaki Lybbert, chairman of the Texas Association of Realtors, said.