Once again, Texas’ sprawling suburbs dominate the U.S. Census Bureau’s list of the 10 fastest-growing large cities in the country.   Between 2015 and 2016, Conroe — a Montgomery County suburb just past The Woodlands on Interstate 45 north of Houston — grew 7.8 percent, more than any city with more than 50,000 residents, data released this week shows.  That’s also more than 11 times the nation’s growth rate, 0.7 percent.    Coming in second and third on the list of fastest-growing cities: None other than Frisco, which grew 6.2 percent, and McKinney, posting a 5.9 percent gain — though McKinney added more residents.  New Braunfels, northeast of San Antonio, and Georgetown, a northern suburb of Austin, are on the list, but dropped from their top positions the previous year.  The only other state to have more than one city on the list was Florida.  “It’s kind of more of the same with suburban growth, and growth in that Texas Triangle,” said Mike Cline, a demographer with the Hobby Center for the Study of Texas at Rice University. 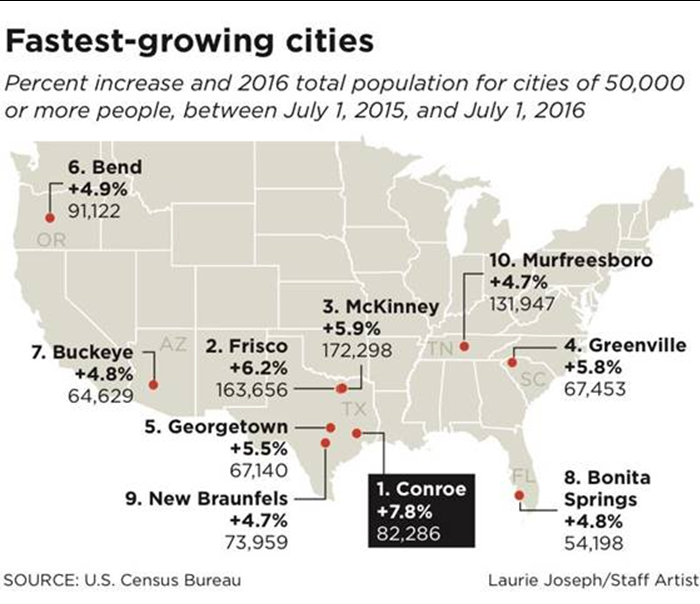 Of course, Texas’ biggest cities added more residents in total, even if that represented a smaller percentage growth. San Antonio, Dallas, Fort Worth, Houston and Austin were all among the nation’s 10 cities that added the most people from 2015 to 2016.  Still, experts say that outward ripple of development into suburban cities farther and farther away from urban cores is worth tracking closely — even if suburban growth is nothing new.  “There’s a lot of jobs being created in those areas, which means a lot of infrastructure development as well. With new households showing up every day, they need places to live, a road to drive their cars on, schools,” said Lloyd Potter, Texas’ state demographer. “There’s this kind of pattern of satellite urbanization.”

“Urban cores are becoming more people that are foreign-born or first or second generation,” he said. “It’s changing the cultural characteristics, especially in Houston in Dallas.”   In any case, Cline said, it’s unlikely that the growth will slow any time soon: Texas is still well on pace to double its population by 2050.  Texas also has another thing that sets its metro areas apart from those in other states: open land.

Stein said that makes for a unique opportunity — and challenge — to build suburbs of the future, rather than the more traditional communities that center on strip malls with big parking lots and single-family houses on acre lots.  “The concern is that there’s a sustainability factor that doesn’t necessarily appear in one or two developments, but if you get a lot of developments going in, you’ve got to extend highways and services,” she said.   “As long as you maintain employment centers in urban areas, they will continue to thrive,” Stein said.