Higher housing costs will be the hot button issue for North Texas buyers in 2017.  Several years of double-digit home price increases had already made Dallas-Fort Worth one of the priciest residential markets in the state.  Now, with mortgage costs expected to rise throughout the year, the pinch is even greater for would-be homebuyers.  Dallas is at the top of the list of U.S. cities where homebuyers are running into a lack of housing they can afford, according to residential marketing firm Trulia. 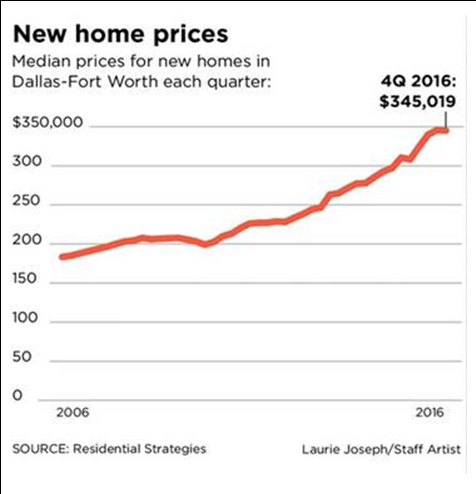 Home shoppers here are more than twice as likely to find that houses on the market don't meet their price needs, Trulia research shows.   "The widening gap between listings and searches underscores the difficulty homebuyers face in locating an affordable home they like," Trulia researchers say.  Dallas is what Trulia calls the most "mismatched" home market in the country, with a lack of starter and trade-up homes. The local market has a larger share of premium-priced houses.  "During the past two years, Dallas, like every other metro on this list with the exception of Houston, has seen inventories decline at a faster rate than the national average, contributing to higher market mismatch," Trulia says in a new report.  In the last decade, the cost of a new house in D-FW has increased 80 percent. Prices of preowned houses have gone up about 65 percent.  At the same time, median incomes have stayed relatively flat when adjusted for inflation.  New homes in North Texas now have a median cost of more than $345,000, and a mid-priced preowned home is $230,000, according to the latest estimates.  The spread between what homes in North Texas cost and what people can afford is growing even wider.  In January, median home sales prices rose another 15 percent compared with a year earlier.