Younger buyers are likely to drive growth in residential markets in the years ahead as the economy stays on a positive track and interest rates stay relatively low, two top economists said Friday at the 2016 REALTORS® Conference & Expo in Orlando, Fla. 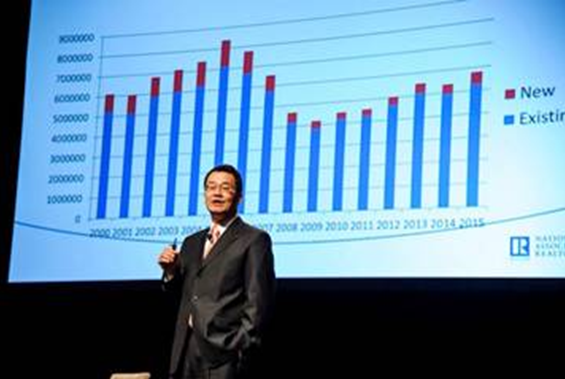 Look for existing-home sales to end the year at a 5.4 million level, a small increase from last year, NAR Chief Economist Lawrence Yun told REALTORS® at a residential economic forum. For 2017, he expect sales to grow modestly, to 5.5 million units and then to 5.7 million the year after that.  Long-term interest rates are expected to tick up but stay low by historical standards for the foreseeable future. He forecasted rates to end the year at 3.6 percent, then rise to 4.1 percent in 2017 and then to 4.5 percent.  Dennis Lockhart, president of the Federal Reserve Board of Atlanta, who also spoke at the forum, said mortgage rate increases are unlikely to be a roadblock to healthy home sales.  “REALTORS® shouldn’t interpret the prospect of rising rates as ominous,” he said.

In the short-term, rising home prices and difficulty obtaining credit continue to keep many households, including young households trying to become first-time buyers, out of the market, which is making it hard for the country’s homeownership rate to make sizable gains since it dipped after the downturn several years ago. The current home ownership rate of 63.5 percent remains near a 50-year low.  Despite those hurdles, both Yun and Lockhart said young households will drive home ownership gains in the years ahead. That’s because the U.S. economy is showing resiliency even as other major economies, like Japan and the European Union, struggle. In the U.S., jobs and wages are growing and are expected to continue growing, which will undergird home sales. “There is pent-up demand” from younger households, said Yun.

To boost home sales, Yun said, inventories need to increase in many markets, a precondition to cooling appreciation.  Yun said the federal government could help spur new constriction by easing regulations on community banks, which are the primary lenders to home builders. Since passage of banking reform laws in the wake of the downturn, community banks have been facing the same regulatory constraints as large, systemically important financial institutions even though they don’t pose the same risk and lack the resources to meet enforcement requirements. He also said governments can help address construction labor shortages by encouraging vocational skills training and easing regulations that impose high costs on builders.