"I would expect this somewhat disappointing spring selling season will be a bit of a wake-up call for (North Dallas suburban) home sellers, and they will eventually consider lowering asking prices, which in turn will bring some buyers back to the table," Attom Data economist Daren Blomquist said. 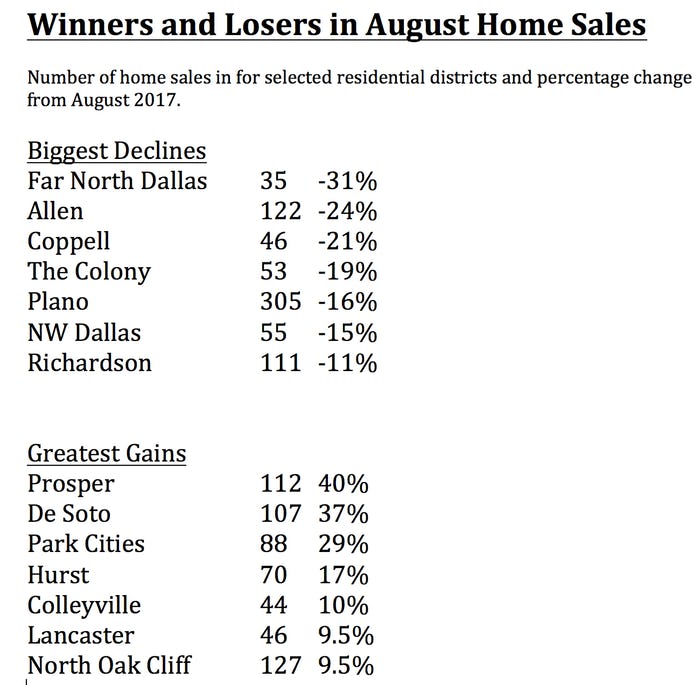 The slowdown in Dallas-Fort Worth's housing market may be worse than at first glance. Sales of preowned single-family homes dropped 1 percent annually in August in all of North Texas, according to the latest numbers from the Real Estate Center at Texas A&M University. Those numbers include data on more than two dozen counties stretching from the Red River to Waco. When you drill down in the numbers to just the immediate D-FW area, August's dip in home purchase activity was much larger. In the Dallas area, sales of preowned homes by real estate agents fell by about 4 percent in August from a year earlier. Fort Worth-area sales managed to eke out a 1 percent year-over-year rise in home purchases made through real estate agents. But some Dallas-area residential districts saw marked declines in home buying last month.

Real estate agents say the overall numbers understate the housing sector cooldown. A look at individual neighborhoods gives clearer insight into the state of the market.  Sales last month were down almost 31 percent in Far North Dallas. They dropped 24 percent from August 2017 totals in Allen, and were off 21 percent in Coppell. Plano had a 16 percent year-over-year sales decline and sales were down more than 11 percent in Richardson and about 9 percent lower in Frisco. Not all of North Texas' markets saw the housing market hit the brakes. Sales soared 40 percent in Prosper, for instance, and were 37 percent higher in DeSoto. The pricey Park Cities market had a 29 percent jump in August sales from the previous year.