The political geography of Texas is byzantine, born from an idea that's been embraced since the state's creation: local control.  Texans LOVE local control, and the progeny of that love is a glut of local governments. Texas has more counties than any other state in the nation: 254, nearly 100 more than the next state, Georgia. It has the most incorporated cities: 1,216. And it's neck and neck with California for the most independent school districts, with Texas narrowly in the lead at 1,023 ISDs (more than 1,200 when adding in charter school operators).

Let's take a look at the confusing boundaries of Dallas and its norther suburbs in relation to school district boundaries: 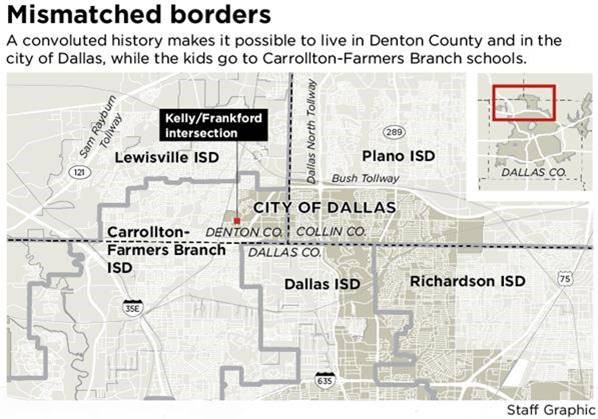 Given Texas' governmental complexity, sheer size and rich history, it's not surprising that school district, city and county boundaries often don't match up. How things got so complicated is all about the history of independent school districts in Texas.

First things first: Denton County was created in 1846, carved from Fannin County as part of a massive redrawing of county lines by the state's first legislature. The number of county jurisdictions in Texas leapt from 36 in 1845, when the state was admitted into the United States, to 66 by the end of 1846. Denton, Collin and Dallas counties were part of this expansion.

Today's map of school districts — which looks like interlocking puzzle pieces covering the entire state —  is a relatively modern invention. In the state's early years, schools were hyperlocal, spread across the map like stars scattered in the night sky. They were created and funded by local communities without much regard to the next school around the bend.

When the state's Reconstruction government tried to apply order to the system following the Civil War, installing a highly centralized system with a state superintendent and 35 judicial districts — and compulsory attendance and a 1-cent tax for building schools — Texans revolted.  Frederick Eby, one of the state's most renowned educational historians, wrote the following passage about the changes in 1954:  "This radical system of education practicing the philosophy of stateism was the ultimate of tyranny. Furthermore it proved outrageously extravagant. In four years it heaped up a debt of over a million dollars, which was ruinous to a state so recently impoverished by war. Galling as the system was, physical violence was fortunately averted. In 1873 the Democratic party came back into power in the Texas Legislature."

The idea of "independent" school districts came about in 1875, when the state legislature authorized incorporated cities to assume control of the schools within their limits, build schoolhouses and levy local taxes for schools. Rural schools, in "common" school districts, weren't granted a similar taxing authority until much later, and their quality suffered until major reforms in the 1940s and 1950s.

According to Gene Preuss, an associate professor of history at University of Houston-Downtown, the School Law of 1884 — in addition to establishing a state board of education consisting of the Governor, Secretary of State and Comptroller — required commissioners courts in each county to establish school districts "as convenient as possible to the scholastic population.  But a community of 20 or more families could establish a school district."   At the meeting of the Texas State Teachers' Association in 1903, State Superintendent Arthur Lefevre said: "The idea that each little school and its teacher should have its separate district and separate board of trustees is the most disorganizing mistake in which our public school system has been involved."

By 1921-22, Texas had a whopping 7,369 common school districts — two-thirds of them one-room schools — in addition to 858 independent school districts found in the state's cities and towns.  When the state produced a report on the adequacy of the Texas school system in 1939, Denton County had six independent districts — Denton, Krum, Lewisville, Pilot Point, Ponder and Sanger — as well as 59 common white schools and 19 common "colored" schools. Two of those schools were in Hebron Common School District, which separately served white and black students in the southeast corner of Denton County.

Seeing the population boom headed its way, Dallas' northern neighbors — including Carrollton, Addison, Richardson, Lewisville and Plano — started to aggressively annex and consolidate farmland and smaller communities during the 1950s and 1960s.  But as towns aggressively annexed farm land and small communities, such as the city of Dallas annexation of the town of Renner in 1977 (encompassing today's city of Dallas that lies within Collin and Denton counties), school district boundaries had already been established and approved the state of Texas many years prior.